So if you've been following my twitter, you probably already know that I've been mulling over the idea of reducing KB to once a week for the remainder of the school quarter.
I cannot stress enough how much I hate the idea of doing so, because drawing KB is effing awesome and doing school shit is much less awesome. But this being my last quarter, and quite a doozy of one, I should probably try not to fail anything needlessly!
The good news is that I'm on week 4 out of a 10 week quarter, so the number of updates I'll be missing isn't actually that much! And afterwards I'll be in a bit of cool nebulous time between "school" and "real world" where I might be able to MAKE IT UP TO YOU WITH SOME COOL SHITS.
But for now...

For the following six weeks, KB will be updating once a week on Wednesday. Which means that a proper update will happen tomorrow, for one. Afterwards, things shall resume for serious!
If you're curious what I'm up to meanwhile, my twitter and tumblr are great places to see what I'm doing for school and in my small amounts of spare time.
All the Vol 2 preorder books shipped from the printer on Saturday, so those should also be here any day! I'll be sharing some of those artist editions as I draw 'em, which I plan to do in the most timely manner possible and get 'em out to everybody.

So big apologies for the schedule reduction! But I will see you tomorrow for more ROBOT ANIME I mean Kiwi Blitz!!
On the Subject of Books~~
Posted April 7, 2012 at 02:41 pm 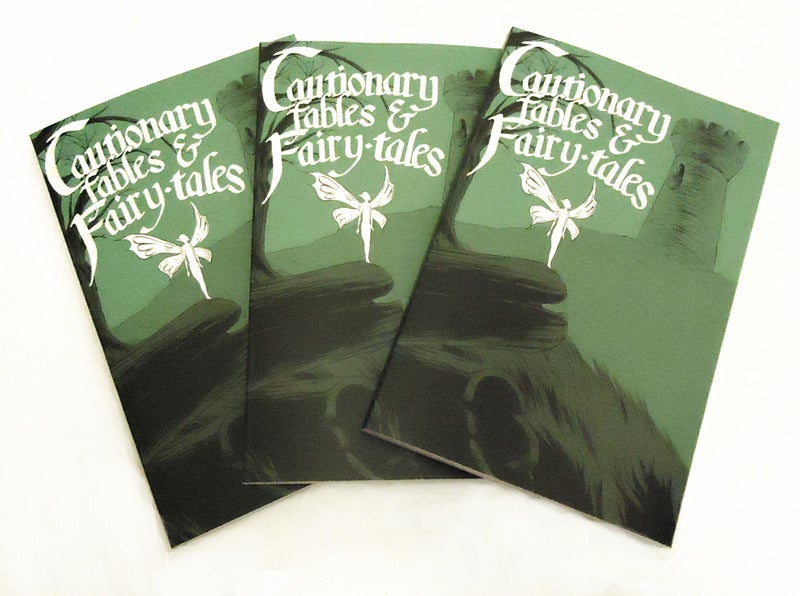 So while I'm waiting for Createspace to approve the new interior files for Volume 2, I wanted to catch you guys up on Cautionary Fables and Fairytales, the anthology I did that Jack and the Beanstalk comic for.

At ECCC I met with Kel and did all my signatures for the my-signed-versions and everyone-signed-versions, so anyone who ordered the former should be getting those soon!

And if you missed out on the kickstarter but are still interested in readin' some Fairytales, you can now buy the digital or physical version of the book over here!
Volume 2 Preorders Closed!
Posted April 6, 2012 at 01:59 am
Thank you so much to everyone who preordered! I have a few final edits to make to the book, then I'll send off for all the copies tomorrow or saturday!
Meanwhile I can start on some of these Volume 1 sketches and AEs! I'm excited that so many people ordered both together! : D
Thanks again you guys! You make all these late nights worth every minute!
Emerald City
Posted March 17, 2012 at 01:44 pm Just an update on ECCC! Here's where I'll be. Please come see me in back-corner-land!

I'll have my usual books and prints, as well as a few copies of the Jack floppies and some new Adventure Time and dog-related prints and buttons! I might also have a new KB print if I can think of a good design by the con. And as always I'll be sketching in books and offering commissions.

So if you live in the Seattle area, please stop by and say hi!
The Coming Weeks
Posted March 16, 2012 at 01:16 am
Hey guys, the next couple weeks are going to be mostly guest strips and updates from the upcoming print volume, 'cause I'll be busy with a few things. But they are interesting things so I thought I'd update you in that regard!

So while that's all going on, I've got some great guest comics lined up and I'll be sharing some of this content as I complete work on it.

I'll also be planning out the next few chapters of KB, 'cause the end of this chapter is kinda the end of the first arc. The next arc has a lot of exciting stuff, and a big new group of villains! I look forward to sharing it with you guys : )
What's Up in the Hood
Posted March 1, 2012 at 10:53 am
Haha guys this is going to sound completely ridiculous, but I slept through all of yesterday thanks to a headcold. I'm convinced my body is making up for lost time by giving me ALL SICKNESSES.
So today's KB page will go up pretty late tonight or early tomorrow morning. But it's going up!!

Also, I'll be attending A-Kon in Dallas this year! Dragged myself outa bed last night to play the sign-up-as-fast-as-ya-can game. So if you live around Dallas, come see me there!

Back to work aaaaa
KB Book/Random Manga Combo Deal!?
Posted February 27, 2012 at 02:19 pm
OFFER NOW CLOSED! I actually ran out of KB books before Manga XD Awaiting my restock order~~
If you ordered a book any time in the past few days, don't worry: you're getting the deal! I'm drawing in 'em right now and will mail 'em out today.
Avatars
Posted February 24, 2012 at 12:44 pm
This is gonna sound silly, but how the heck do you guys choose avatars for yourselves? When I go into my account profile, there's no option for it. I'm trying to figure out if this is just because it's an administrator account or what.

It's not like I meant to be Gear this whole time >.>
Woops I lied
Posted February 16, 2012 at 06:31 am
So I really thought this virus thing was gonna be better by now. But it turns out... that is not the case.
KB will return on Tuesday once my body remembers how food works. I'll make it up to you guys! Somehows.
Tumblr Stuff
Posted February 15, 2012 at 07:37 pm
Heya guys,
I realized I posted these to tumblr and not here, which seems silly. If you'd like to link to my site, I made some buttons in what appears to be the common size for such things:

You should totally follow my Tumblr though. I draw all sorts of random stuff over there that you may enjoy.

If you follow my twitter, meanwhile, you'll know I had some sort of stomach virus or some shit and have been sleepin' all day. Still gonna try to get this page done for tomorrow though! But we'll see what time it ends up completed :X C'mon body, work with me here dammit.
Page 10-12 on Friday
Posted February 8, 2012 at 09:04 pm
Sorry for the double-delayed week, guys. But the next KB pages will go up on Friday morning instead o' thursday.

For those curious what's up, it's no secret that I take antidepressants, which in general have been really helpful and make things pretty great. Thanks to a mix up between CVS and the doctor, though, I went without 'em for a few days this week. Antidepressant withdrawal is a biiiitch, as it turns out. It's not like "oh god I'm EXTRA SAD now", more like I'm nauseous and my head is going bubum bubum. But I've got my meds back and will be evening out tomorrow so it's no big deal. It's just kinda hard to think linearly at the moment!

So I think a day's delay might be better than whatever weird nightmare page I'd produce in this condition. Of course none of this would be a problem if I had a buffer but there's ME for ya!
Meanwhile I'm at least coherent enough to work on some of these colorin' jobs so I'll try to get those out of the way for further future crime adventures.

Why not go read an awesome comic like Gunnerkrigg in the meantime or somethin'!
KB: Still a thing
Posted February 7, 2012 at 06:06 pm
Hey guys, I promise KB is still updating today, well tonight. Really sorry for the (mostly bedrest-related) delay.
Meanwhile, please be placated by my favorite Sleepy Henry pictures. Good thing I don't have GitS cybernetic eyes that can just take pictures themselves, or you'd have like 50 of these every day.
Henry Alert
Posted January 17, 2012 at 01:32 pm Only 5 hours left for CF+F preorder!
Posted January 11, 2012 at 05:49 pm
I realized I went a good while without posting about this. Well we reached our goal a few days ago! So if you'd like to get your hands on an early copy, you've got 5 more hours.

And thanks so much to everyone who preordered! I'm really excited to see this book out : )
Poll is over by the way!
Posted January 3, 2012 at 08:41 am
I'll be makin' an announcement with the winners once I finish the big fancy SPLASH IMAGE thing for it!
So stop sending in votes already!! XD
< PreviousNext >
Page 1 2 3 4 5 6 7

@ArgenCR And days of the week, you maniacs~!